To get into the story I recommend to read the following articles in this sequence:

In this post I describe in details, how you can create the calibration factors for k0 ... k3 based on raw data measured with the power sensor.

I've updated the the display control files to the current Nextion Editor 1.62:

HMI-file for the editor: here

After aquiring an HF signal generator, a used HP 8647A, I started to do some testing regarding the precision of the RF powermeter.

With the firmware version 1.9.0 there are some minor enhancements:

Here are the required files:

Some times ago, I found for me a solution, how to handle the unstable readings from the ADC. I've described it in this post.

In the meantime, some HAMs also build the RF powermeter based on the work of Makis, SV1AFN and myself. One if these HAMs, PA3AXA Rens, digged a little bit deeper and analysed the problem in detail. Here his description.

With the firmware version 1.8.1 there are some minor enhancements:

Here are the required files:

The Nextion display needs the content defined in the file PowerMeter.HMI. You can either upload it with the Nextion editor via a serial link to the display or you can copy the TFT file to an SD card and put this into the socket on the Nextion display.

With the firmware version 1.8.0 I've introduce the capability to display also the input power in Watt instead of dBm. Simply tap on the unit field on the display to toggle between dBm and Watt.

I've introduced with the firmware version 1.7.1 a complexity to this project which may not be suitable to all users.

WIth the firmware version 1.7.2 I've reduced the complexity by removing the remote configuration utilities.

If you are using my powermeter software in conjunction with Maki's module and have a unstable readings or sporadic extrem value changes, this is a problem of the CS pin. It may be a grounding issue - Makis is currently analysing the problem.

I've developed a new firmware for my RF Powermeter. In this firmware, the user can now program for six calibration points the factors for the polynimial regression functions.

Therefor I've developed a JAVA GUI application for downloading these floating point values to the device.

I described here a way how to flash the OptiBoot loader on an Arduino UNO clone. For this you need an ISP or a second Arduino to act as an ISP.

I've added a new feature to the firmware release 1.5.0 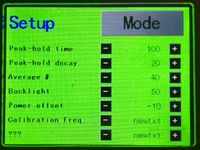 The original library from Dan is not working as expected for me. So I adopted the code a little bit.

You can find the changes below. You can also download "my version" of the library here. Unzip into the Arduino's library folder.

The basic firmware is now running. So I started analysing the accuracy of the used meter head.

Based on the work of Makis, SV1AFN i've build a small, stand-alone power meter with a "nice" GUI. This is the second RF head I've received from Makis. Data about the first one can be found here. 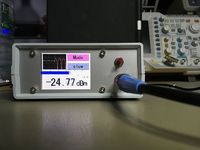